The Duparquet Gold Project consists of several properties held in different entities which, in addition to the Beattie property, include the Donchester, Dumico and Central Duparquet properties.  First Mining, through Clifton Star, is currently a 10% shareholder of 2588111 Manitoba Ltd (“258 Manitoba”), a private company that owns the mineral rights to mining claims that make up the former Donchester mining concession and Dumico property that also form a part of the Duparquet Gold Project, and a 10% shareholder of 2699681 Canada Ltd (“269 Canada”), a private company that owns in whole or in part, the surface rights to the Beattie, Donchester and Dumico properties.  First Mining already owns 100% of the Central Duparquet property.

The total consideration of the Concurrent Transactions is $2.5 million in cash and the issuance of 20,000,000 common shares of First Mining.  In aggregate, the total consideration of the Beattie Offer and the Concurrent Transactions (assuming that all shareholders of Beattie Gold tender their shares to the Beattie Offer) is $8,727,177 in cash and 69,127,820 common shares of First Mining.   The total transaction value based on the twenty trading days volume weighted average price for First Mining’s common shares as of the last trading day prior to this news release is approximately $24 million.

“This transformational acquisition has been a few years in the making and grows First Mining’s M&I gold resources by 40% and inferred gold resources by 50%” said Keith Neumeyer, Chairman of First Mining Gold.  “When First Mining acquired Clifton Star in 2016, we always contemplated the opportunity to consolidate this advanced stage, highly prospective project.  Duparquet fits perfectly with First Mining’s strategy and the capabilities of our team to advance and de-risk a second world class asset.”

“This is a transformational acquisition for First Mining and the Duparquet Gold Project as we plan on consolidating this highly fragmented ownership structure under the First Mining banner.  Duparquet hosts a robust resource profile where two past producing mines have operated in Quebec’s most prolific gold mining district.  First Mining has been a long-time minority shareholder of the companies that own this Project, and the timing was right to acquire full ownership of these companies. We are confident that Duparquet and the district will prove to be a critical strategic asset in the gold sector in Canada as this transaction affirms First Mining’s positioning as a multi-asset developer of major projects in Tier 1 jurisdictions,” stated Dan Wilton, CEO of First Mining. “Together with our ownership of the Pitt and Duquesne projects in Quebec located just east of Duparquet, First Mining will now have 100% ownership exposure to 3.3 million M&I ounces of gold and 2.0 million inferred ounces of gold located in the Abitibi, which is home to some of the largest and richest mineral deposits in the world.  First Mining has completed extensive due diligence and will develop a comprehensive plan to advance the Duparquet Gold Project in the near-term.  Springpole remains a core focus and priority as we continue to advance the project through feasibility and the environmental assessment process.  The addition of Duparquet results in First Mining owning 100% of two projects with multi-million ounce gold resources in what we consider as the best mining jurisdictions in the world and will allow First Mining to leverage our team’s experience with similar projects in advancing these two major gold deposits.”

First Mining will commence an environmental data collection exercise to update the environmental baseline data collected by Clifton Star in 2012 and 2013.  Work is also expected to commence on engineering trade-off studies and an updated economic study to build on the solid technical foundation established by the Project in the 2014 Pre-Feasibility Study.  First Mining has initiated discussions with the relevant Quebec ministries and is committed to working in partnership with regulators, the local municipality, and Indigenous communities to address environmental matters and legacy infrastructure as part of the property’s redevelopment.  In addition, First Mining intends to commence a robust regional exploration data compilation, integration and targeting exercise to develop a path supporting potential resource expansion, resource classification upgrading, and exploration discovery.

About the Duparquet Gold Project

The Duparquet Gold Project is located immediately north of the town of Duparquet, Quebec and covers an area of 1,079 hectares, and consists of 50 mining claims, including two historical mining concessions, which include the four mining properties: the Beattie property (historical mining concession 292) owned by Beattie, the Donchester property (historical mining concession 384) and Dumico property owned by 2588111 Manitoba Ltd., and the Central Duparquet property owned by First Mining.  Both the Beattie and Donchester properties contain past-producing underground gold mines. Historical underground workings and a shaft were developed at the Central Duparquet property, but no gold was produced. The Duparquet Gold Project also contains a tailings pond area straddling the southwest limit of the Beattie property.

Gold was first discovered in the Duparquet region in 1910 with production commencing in 1933 on the Beattie property and on the Donchester property in the 1940s.  Mining and milling operations ceased at Duparquet in 1956 after 23 years of continuous production.  During its lifetime, the Beattie mill at Duparquet produced over 1.3 million ounces of gold at grades higher than 4 g/t.  The Duparquet Gold Project remained mostly dormant until 1987 when increased exploration and drilling activity resumed.  Clifton Star began work on the Duparquet Gold Project in 2008 and between 2008 and 2013, Clifton Star and its partners completed in excess of 260,000 m of drilling that were incorporated into the mineral resource estimate and completed a positive Pre-Feasibility Study in 2014, which detailed a development plan including a 10,000 tpd open pit mine and mill.  Clifton Star was acquired by First Mining in April 2016.

Map of the Duparquet Project 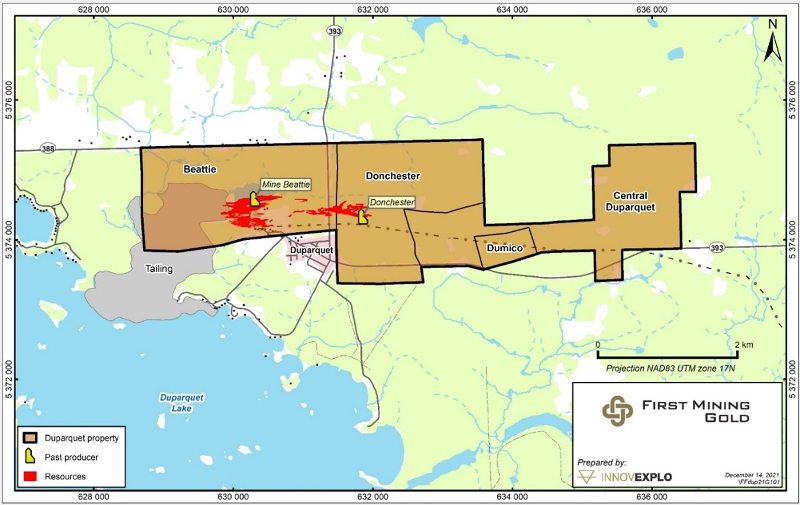 Notes to accompany the Pitt and Duquesne Mineral Resource Estimate:

Mr. Louis Martin P.Geo., (OGQ 0364), a consultant of First Mining, is a “Qualified Person” for the purposes of National Instrument 43-101 Standards of Disclosure for Mineral Projects, and he has reviewed and approved the scientific and technical disclosure contained in this news release.

First Mining is a Canadian gold developer focused on the development and permitting of the Springpole Gold Project in northwestern Ontario. Springpole is one of the largest undeveloped gold projects in Canada. The results of a positive Pre-Feasibility Study for the Springpole Gold Project were announced by First Mining in January 2021, and permitting activities are on-going with submission of a draft Environmental Assessment (“EA”) and Environmental Impact Statement (“EIS”) for the project targeted for 2022. The Company also holds a large equity position in Treasury Metals Inc. who are advancing the Goliath Gold Complex toward construction. First Mining’s portfolio of gold projects in eastern Canada also includes the Pickle Crow (being advanced in partnership with Auteco Minerals Ltd.), Hope Brook (being advanced in partnership with Big Ridge Gold Corp.), Cameron, Duparquet, Duquesne, and Pitt gold projects.

Forward-looking statements in this news release relate to future events or future performance and reflect current estimates, predictions, expectations or beliefs regarding future events and include, but are not limited to, statements with respect to: (i) the satisfaction of the Take-Up Condition and the closing date of the Beattie Offer and the Concurrent Transactions; (ii) First Mining’s plans to complete an updated mineral resource estimate for the Duparquet Gold Project in accordance with NI 43-101 shortly after closing the Beattie Offer and the Concurrent Transactions, including its plans to incorporate drilling data from 2014 to 2022 in such updated estimate; (iii) First Mining’s plans to commence an environmental data collection exercise for the Duparquet Gold Project and its plans to undertake engineering trade-off studies and complete an updated economic study for the project; and (iv) First Mining’s plans to commence a regional exploration data compilation, integration and targeting exercise at the Duparquet Gold Project. All forward-looking statements are based on First Mining's or its consultants' current beliefs as well as various assumptions made by them and information currently available to them. There can be no assurance that such statements will prove to be accurate, and actual results and future events could differ materially from those anticipated in such statements. Forward-looking statements reflect the beliefs, opinions and projections on the date the statements are made and are based upon a number of assumptions and estimates that, while considered reasonable by the respective parties, are inherently subject to significant business, economic, competitive, political and social uncertainties and contingencies. Such factors include, without limitation the Company’s business, operations and financial condition potentially being materially adversely affected by the outbreak of epidemics, pandemics or other health crises, such as COVID-19, and by reactions by government and private actors to such outbreaks; risks to employee health and safety as a result of the outbreak of epidemics, pandemics or other health crises, such as COVID-19, that may result in a slowdown or temporary suspension of operations at some or all of the Company's mineral properties as well as its head office; fluctuations in the spot and forward price of gold, silver, base metals or certain other commodities; fluctuations in the currency markets (such as the Canadian dollar versus the U.S. dollar); changes in national and local government, legislation, taxation, controls, regulations and political or economic developments; risks and hazards associated with the business of mineral exploration, development and mining (including environmental hazards, industrial accidents, unusual or unexpected formations, pressures, cave-ins and flooding); the presence of laws and regulations that may impose restrictions on mining; employee relations; relationships with and claims by local communities, indigenous populations and other stakeholders; availability and increasing costs associated with mining inputs and labour; the speculative nature of mineral exploration and development; title to properties.; and the additional risks described in the Company’s Annual Information Form for the year ended December 31, 2021 filed with the Canadian securities regulatory authorities under the Company’s SEDAR profile at www.sedar.com, and in the Company’s Annual Report on Form 40-F filed with the SEC on EDGAR.