Note: Reported widths are drilled core lengths in vertical drill holes that generally track through the core of known mineralization. Consequently, the drilled lengths are indicative only of the vertical continuity of the deposit, and do not represent deposit width in any way. The drill holes cover approximately 830 metres distance along strike of the deposit. All assays were performed by SGS Laboratories of Red Lake, Ontario, who are independent of First Mining and have no relationship with First Mining. Assay values are uncut.

Commenting on the results, Patrick Donnelly, President of First Mining, stated "The recent drilling program at Springpole confirms previous work that demonstrates that this deposit has exceptional mineralization continuity over a significant vertical extent. We look forward to receiving the metallurgical data and completing the new PEA for Springpole later this year, as we believe it could confirm that our Springpole Gold Project is highly viable in the current gold price environment."

All assays were performed by SGS Laboratories of Red Lake, Ontario, who are independent of First Mining and have no relationship with First Mining. Samples were analyzed by using 30 gram fire assay with an atomic absorption finish (protocol GE FAA313). Samples greater than 10 grams per tonne or with visible gold were analyzed by 30 gram fire assay with a gravimetric finish (protocol GO FAG303). All assays reported are uncut. Reported widths are drilled core lengths, and do not indicate true widths.

The Springpole deposit is an alkali gold system characterized by a relatively uniform gold grade distribution within a tuffaceous diatreme breccia complex approximately 1,400 metres long by 250 metres wide and 400 metres deep, as currently understood. The diatreme intrudes an older greenstone sequence of volcaniclastic rocks and basalt flows with thin iron formation composed of laminated pyrite and red chert. Mineralization within the alkali diatreme breccia is composed of native gold, electrum, gold in pyrite, and gold and silver tellurides associated with widespread biotite, minor calcite and fluorite. Mineralization does extend into the greenstone sequence and tends to be more irregular in distribution although higher in gold grade. Gold in the greenstone sequence is associated with quartz veins with ancillary ankerite and tourmaline. The difference in mineralogy between the diatreme hosted and greenstone hosted gold may represent a different stage of gold mineralization in time or it may be a result of zoning. The bulk of gold at Springpole is contained in the diatreme breccia. 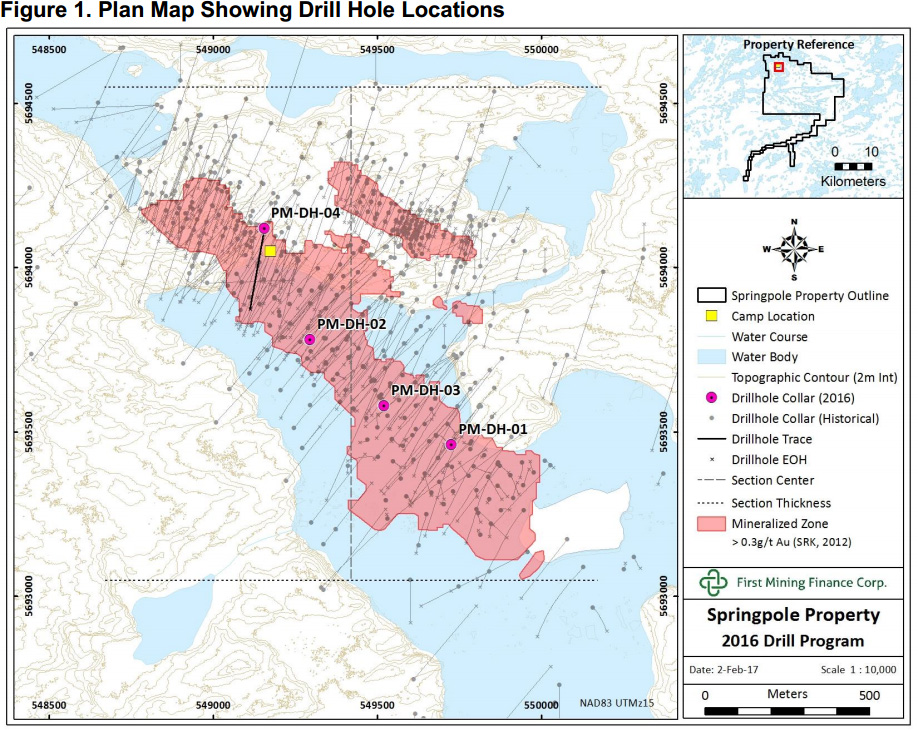 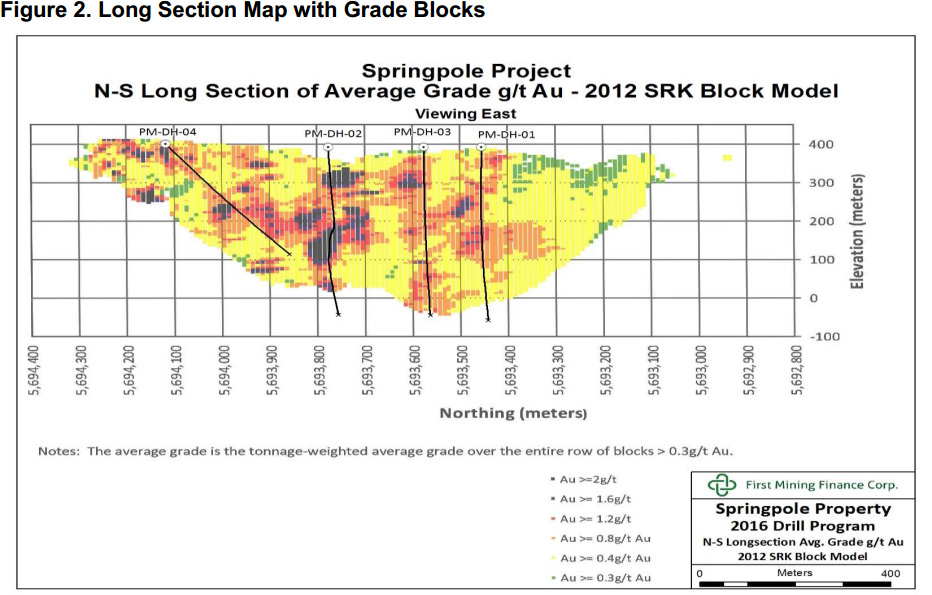 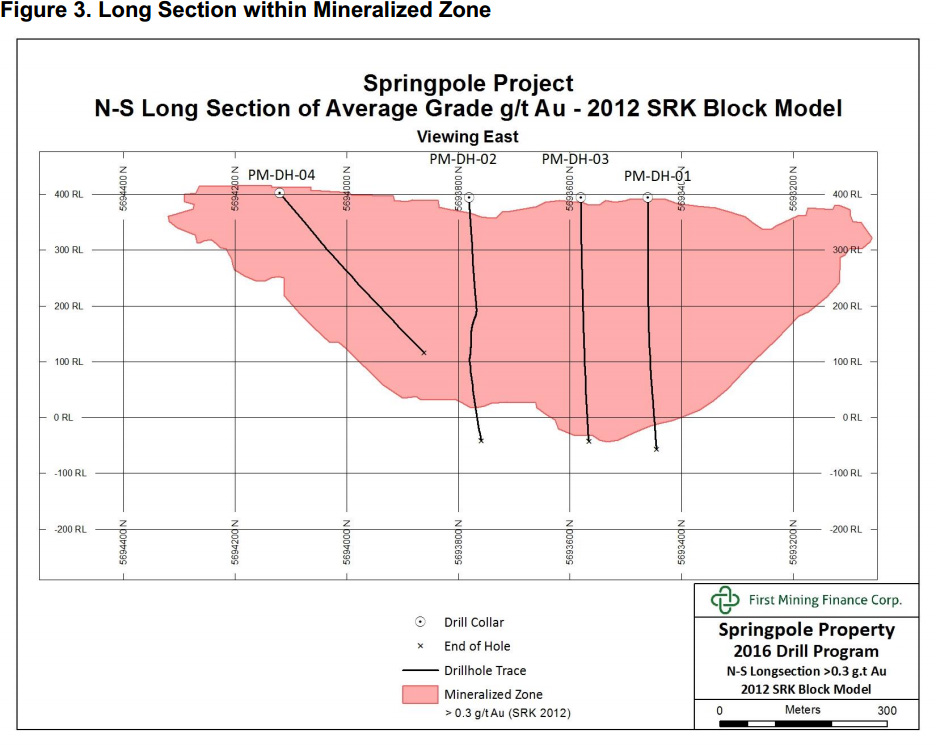 Assaying for the Springpole 2016 drill program was done by SGS at their laboratories in Red Lake, Ontario, and Burnaby, British Columbia. Prepared samples were analyzed for gold by lead fusion fire assay with an atomic absorption spectrometry (AAS) finish. Samples returning assays in excess of 10 g/t gold were re-analyzed by fire assay with a gravimetric finish. As per past practices, fire assay analysis was done on 30 g splits of the pulp for gold, and a further 50 g split was sent to the SGS Burnaby lab for multi-element analysis by two-acid aqua regia digestion with ICP-MS and AES finish.

The QA/QC program for the metallurgical drilling consisted of the submission of coarse duplicates from bulk rejects at a frequency of one for every 20 samples submitted (5% of total). Pulp duplicate submissions were done at the same frequency. Because the drilling was intended for metallurgical test work, no rig duplicates from quartered core were submitted to preserve the core against loss or damage. Commercially obtained certified blank reference materials and standards were inserted on a frequency of one each per 40 samples submitted: 2.5% standards; 2.5% blanks for a total of 5%. Standards consisted of 5 different gold grades ranging from 0.5 to 9.5 g/t, and were sourced from CDN Resource Laboratories in Langley, British Columbia, along with the blank CRM materials.

SGS also undertook their own internal coarse and pulp duplicates analysis to ensure proper sample preparation and equipment calibration. These were randomly inserted at a frequency of 12%, as per laboratory protocol.

Dr. Chris Osterman, P.Geo., CEO of First Mining, is the "qualified person" for the purposes of National Instrument 43-101 Standards of Disclosure for Mineral Projects and he has reviewed and approved the scientific and technical disclosure contained in this news release.

ABOUT THE SPRINGPOLE GOLD PROJECT

First Mining is a mineral property holding company whose principal business activity is to acquire high quality mineral assets with a focus in the Americas. The Company currently holds a portfolio of 25 mineral assets in Canada, Mexico and the United States with a focus on gold. Ultimately, the goal is to continue to increase its portfolio of mineral assets through acquisitions that are expected to be comprised of gold, silver, copper, lead, zinc and nickel.

Forward-looking statements are frequently, but not always, identified by words such as "expects", "anticipates", "believes", "intends", "estimates", "potential", "possible", and similar expressions, or statements that events, conditions, or results "will", "may", "could", or "should" occur or be achieved.

Forward-looking statements in this news release relate to, among other things: receiving metallurgical data on the Springpole gold project and the results of the metallurgical test program, completion of a new PEA for the Springpole project in 2017; the extent of mineralization continuity at the Springpole project; and the exploration potential and upside of any of the Company's projects. There can be no assurance that such statements will prove to be accurate, and actual results and future events could differ materially from those anticipated in such statements. Forward-looking statements reflect the beliefs, opinions and projections on the date the statements are made and are based upon a number of assumptions and estimates that, while considered reasonable by the respective parties, are inherently subject to significant business, economic, competitive, political and social uncertainties and contingencies. Many factors, both known and unknown, could cause actual results, performance or achievements to be materially different from the results, performance or achievements that are or may be expressed or implied by such forward-looking statements and the parties have made assumptions and estimates based on or related to many of these factors. Such factors include, without limitation, the results of future exploration efforts at the Springpole Crow project; management's discretion to refocus its exploration efforts; fluctuations in the spot and forward price of gold, silver, base metals or certain other commodities; fluctuations in the currency markets (such as the Canadian dollar versus the U.S. dollar); changes in national and local government, legislation, taxation, controls, regulations and political or economic developments; risks and hazards associated with the business of mineral exploration, development and mining (including environmental hazards, industrial accidents, unusual or unexpected formations, pressures, cave-ins and flooding); the presence of laws and regulations that may impose restrictions on mining; employee relations; relationships with and claims by local communities and indigenous populations; availability and increasing costs associated with mining inputs and labour; the speculative nature of mineral exploration and development; and title to properties. Readers should not place undue reliance on the forward-looking statements and information contained in this news release concerning these times. Except as required by law, First Mining does not assume any obligation to update the forward-looking statements of beliefs, opinions, projections, or other factors, should they change, except as required by law.