Note: Assaying for the Miller drill program is being done by SGS Canada Inc. ("SGS") at their laboratories in Red Lake, Cochrane and Lakefield, Ontario. Reported widths are drilled core lengths; true widths are unknown at this time. Assay values are uncut.

Jeff Swinoga, President and Chief Executive Officer of First Mining, stated, "We are excited with the continued drilling success of our Goldlund regional exploration program, indicating the potential for significant gold mineralization 10 kilometres from the initial gold discovery. This new discovery is encouraging in light of the property's 50 kilometre strike length. These two new reported holes, located at the Miller prospect, have both encountered gold mineralization, with several visible gold occurrences similar to the first six drill holes. The early results from the Miller prospect indicate that the entire width of the sill/dyke appears receptive to gold mineralization and this mineralization remains open along strike in both directions and also at depth."

A comparison of the results of the initial fire assay program with the fire assay results incorporating the metallic screen fire assay re-runs is presented in Table 1 below.

In addition to drilling the Miller prospect, the Company has completed seven diamond drill holes at the Eaglelund prospect, and one diamond drill hole at the Miles prospect (see Figure 1 below), for a total 2018 summer regional drill program of 688 metres. This completes this phase of the Company's regional drill program at Goldlund, and assaying is currently underway for these eight holes. 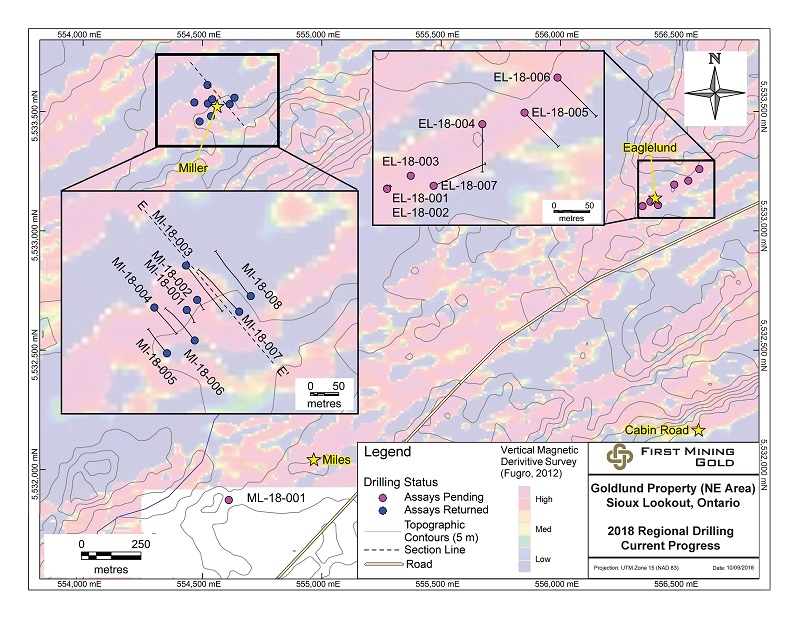 Figure 2. Cross-Section through the Miller Prospect 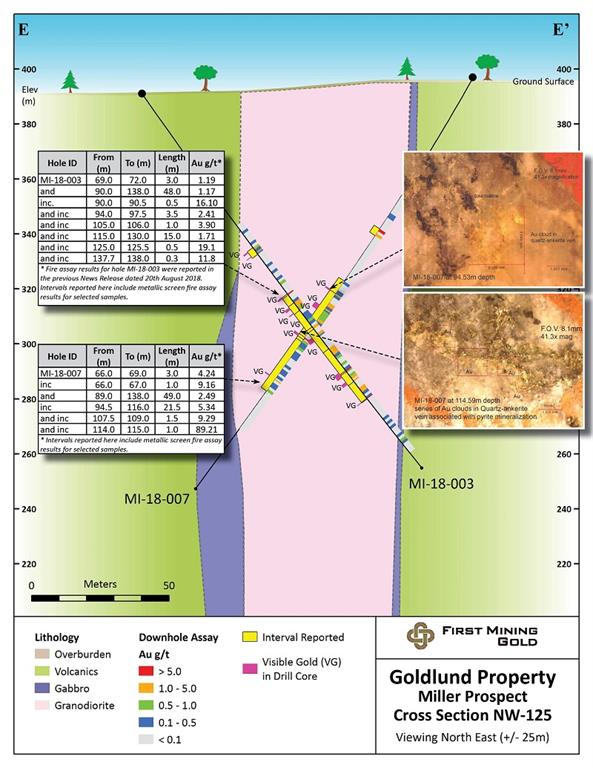 The QA/QC program for the 2018 regional drilling programs at Miller, Eaglelund and Miles consists of the submission of duplicate samples and the insertion of certified reference materials and blanks at regular intervals. These are inserted at a rate of one standard for every 20 samples (5% of total) and one blank for every 30 samples (3% of total). The standards used in the 2018 regional drilling program consist of 5 different gold grades ranging from 1 to 9 g/t Au, and are sourced from CDN Resource Laboratories in Langley, BC. Blanks have been sourced locally from barren granitic material.

Field duplicates from quartered core, as well as 'coarse' or 'pulp' duplicates taken from coarse reject material or pulverized splits, are also submitted at regular intervals with an insertion rate of 4% for field duplicates and 4% for coarse or pulp duplicates. Additional selected duplicates are being submitted to an umpire lab for check assaying. SGS also undertake their own internal coarse and pulp duplicate analysis to ensure proper sample preparation and equipment calibration.

Dr. Chris Osterman, P.Geo., COO of First Mining, is the "qualified person" for the purposes of National Instrument 43-101 Standards of Disclosure for Mineral Projects ("NI 43-101") and he has reviewed and approved the scientific and technical disclosure contained in this news release.

The Goldlund deposit is situated within a land package of approximately 280 square kilometres (28,000 hectares) referred to as the Goldlund Gold Project. The Property has a strike-length of over 50 kilometres in the Wabigoon Subprovince. Goldlund is an Archean lode-gold project located in northwestern Ontario, approximately 60 kilometres from the township of Dryden. The claims that make up the land package cover the historic Goldlund and Windward mines.

First Mining Gold Corp. is an emerging development company with a diversified portfolio of gold projects in North America. Having assembled a large resource base of 7 million ounces of gold in the Measured and Indicated categories and 5 million ounces of gold in the Inferred category in mining friendly jurisdictions of eastern Canada, First Mining is now focused on advancing its assets towards production. The Company currently holds a portfolio of 24 mineral assets in Canada, Mexico and the United States.

For further information, please contact Jeff Swinoga, President and CEO at 416-816-0424, or Derek Iwanaka, Vice President of Investor Relations at 604-639-8824, or visit our website at www.firstmininggold.com.

Forward-looking statements in this news release relate to future events or future performance and reflect current estimates, predictions, expectations or beliefs regarding future events and include, but are not limited to, statements with respect to: (i) the near-term potential to expand the existing Goldlund resource; (ii)the potential for the existence of significant gold mineralization 10 kilometres from the current resource area at the Goldlund project along the property's 50 kilometre strike length;(iii) the completion of metallic screen fire assays; (iv) assaying of the seven drill holes at the Eaglelund prospect and one drill hole at the Miles prospect, and the results of assays; (v) the estimated amount and grade of Mineral Resources at Goldlund; and (vi) the potential for exploration upside at Goldlund. All forward-looking statements are based on First Mining's or its consultants' current beliefs as well as various assumptions made by them and information currently available to them. The most significant assumptions are set forth above, but generally these assumptions include: (i) the presence of and continuity of metals at Goldlund at estimated grades; (ii) the capacities and durability of various machinery and equipment; and (iii) success in realizing proposed regional drilling programs. Although the Company's management considers these assumptions to be reasonable based on information currently available to it, they may prove to be incorrect.

By their very nature, forward-looking statements involve inherent risks and uncertainties, both general and specific, and risks exist that estimates, forecasts, projections and other forward-looking statements will not be achieved or that assumptions do not reflect future experience. We caution readers not to place undue reliance on these forward-looking statements as a number of important factors could cause the actual outcomes to differ materially from the beliefs, plans, objectives, expectations, anticipations, estimates assumptions and intentions expressed in such forward-looking statements. These risk factors may be generally stated as the risk that the assumptions and estimates expressed above do not occur as forecast, but specifically include, without limitation: (i) risks relating to variations in the mineral content within the material identified as Mineral Resources from that predicted; (ii) general risks related to exploration drilling programs; (iii) developments in world metals markets; (iv) risks relating to fluctuations in the Canadian dollar relative to the US dollar; (v) management's discretion to refocus the Company's exploration efforts and/or alter the Company's short and long term business plans; and (vi) the additional risks described in First Mining's Annual Information Form for the year ended December 31, 2016 filed with the Canadian securities regulatory authorities under the Company's SEDAR profile at www.sedar.com, and in First Mining's Annual Report on Form 40-F filed with the SEC on EDGAR.

This news release has been prepared in accordance with the requirements of the securities laws in effect in Canada, which differ from the requirements of U.S. securities laws. Unless otherwise indicated, all resource and reserve estimates included in this news release have been prepared in accordance with National Instrument 43-101 Standards of Disclosure for Mineral Projects ("NI 43-101") and the Canadian Institute of Mining, Metallurgy, and Petroleum 2014 Definition Standards on Mineral Resources and Mineral Reserves. NI 43-101 is a rule developed by the Canadian Securities Administrators which establishes standards for all public disclosure an issuer makes of scientific and technical information concerning mineral projects. Canadian standards, including NI 43-101, differ significantly from the requirements of the United States Securities and Exchange Commission ("SEC"), and mineral resource and reserve information contained herein may not be comparable to similar information disclosed by U.S. companies. In particular, and without limiting the generality of the foregoing, the term "resource" does not equate to the term "reserves". Under U.S. standards, mineralization may not be classified as a "reserve" unless the determination has been made that the mineralization could be economically and legally produced or extracted at the time the reserve determination is made. The SEC's disclosure standards normally do not permit the inclusion of information concerning "measured mineral resources", "indicated mineral resources" or "inferred mineral resources" or other descriptions of the amount of mineralization in mineral deposits that do not constitute "reserves" by U.S. standards in documents filed with the SEC. Investors are cautioned not to assume that any part or all of mineral deposits in these categories will ever be converted into reserves. U.S. investors should also understand that "inferred mineral resources" have a great amount of uncertainty as to their existence and great uncertainty as to their economic and legal feasibility. It cannot be assumed that all or any part of an "inferred mineral resource" will ever be upgraded to a higher category. Under Canadian rules, estimated "inferred mineral resources" may not form the basis of feasibility or pre-feasibility studies except in rare cases. Investors are cautioned not to assume that all or any part of an "inferred mineral resource" exists or is economically or legally mineable. Disclosure of "contained ounces" in a resource is permitted disclosure under Canadian regulations; however, the SEC normally only permits issuers to report mineralization that does not constitute "reserves" by SEC standards as in-place tonnage and grade without reference to unit measures. The requirements of NI 43-101 for identification of "reserves" are also not the same as those of the SEC, and reserves reported by the Company in compliance with NI 43-101 may not qualify as "reserves" under SEC standards. Accordingly, information concerning mineral deposits set forth herein may not be comparable with information made public by companies that report in accordance with U.S. standards.