“We are extremely excited to continue our consolidation efforts in the region by bringing in the High Grade Island prospect, as it represents one of the most prospective areas in the Birch-Uchi Greenstone Belt,” stated Dan Wilton, CEO of First Mining. “Despite being explored since the 1980s and with demonstrated high-grade drill intersections of up to 245 g/t gold, High Grade Island has been underexplored relative to other high-grade camps in the belt and will be a priority target for us as we embark on our first broader regional exploration program next year. Through several land consolidation transactions over the last few months, First Mining now holds some of the most prospective areas of the Birch-Uchi Greenstone Belt, and with future exploration success these new targets have the potential to significantly increase the grade profile, resource potential and economics at our Springpole Gold Project.” 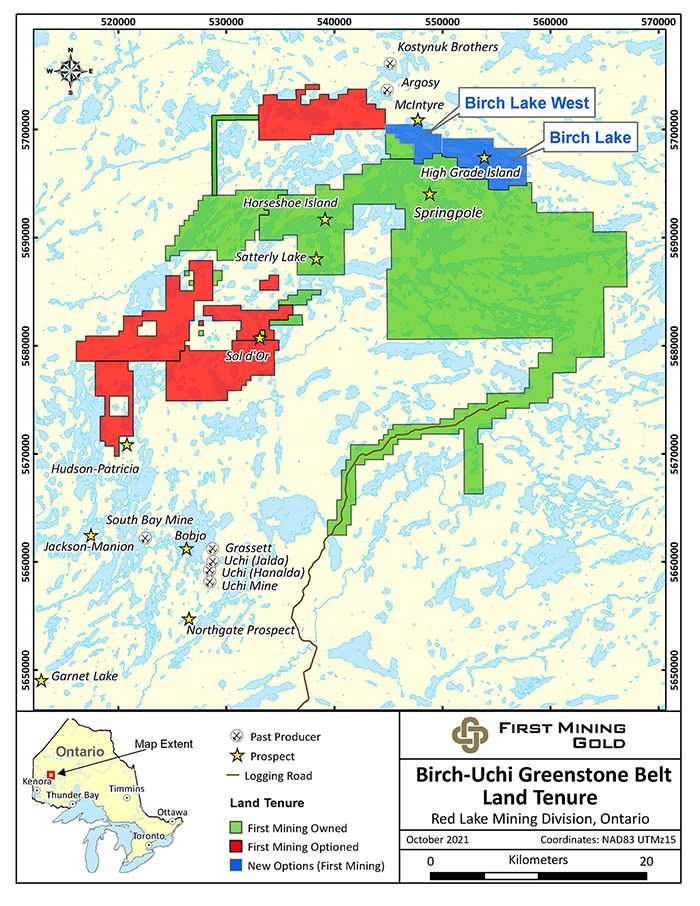 High Grade Island is located on Pelangio’s Birch Lake property and lies approximately 2 km northeast of the Springpole Gold Project and approximately 120 km northeast of Red Lake. Two spatially separate zones of mineralization have been identified on High Grade Island: the Main Central Zone located at the centre of the island, which consists of greenstone-hosted, gold-quartz vein type mineralization, and the Western Zone, located 700 m to the west in the northwestern part of the island, which comprises iron formation-hosted, disseminated gold mineralization. The two zones are related to a single deformation zone interpreted to be up to 120 m in width and with a total potential strike length of over 1,100 m.

The Birch Lake property was explored by Dome Exploration Canada (later Placer Dome) from 1986 to 1996, whose work consisted of mapping, geophysical and geochemical surveys along with follow-up diamond drilling, which was mainly focused on the Main Central Zone. This zone is characterized by lenses of mineralization within a wide altered and sheared zone, and the best gold values appear to lie in northwest-plunging shoots. Drilling results included large intercepts (4.2 m at 8.7 g/t Au in hole P255A-074) as well as several high-grade intercepts associated with coarse visible gold (2.0 m @ 105 g/t Au, including 1.0 m at 209 g/t Au, in hole P255A-078). The majority of the Placer Dome drilling tested the Main Central Zone over a strike length of 350 m and to a depth of 200 m. Additional drilling was completed by Trade Winds Ventures Inc. in 2004 and 2005 to evaluate the Main Central Zone between 200 and 350 meters below surface. Numerous gold intercepts were noted including 34.5 g/t Au over 9.85 m from 239.15 to 249.0 m (hole TWBL-096) and 244.7 g/t Au over 2.45 m from 357.85 to 360.30 m (hole TWBL-097).

The Western Zone is located in the same deformation zone as the Main Central Zone but the mineralization is associated with an iron formation host. There has been limited drilling in this zone to date with the best intercept from drill hole 028, which returned 5 m at 1.6 g/t Au from a near surface intercept.

High Grade Island is accessible from First Mining’s Springpole Gold Project by boat during the summer months and by snowmobile or ice road during the winter months.

Drill highlights from the historical drill programs are provided in the table below:

Hazel Mullin, P.Geo., Director, Data Management and Technical Services of First Mining, is a “Qualified Person” for the purposes of National Instrument 43-101 Standards of Disclosure for Mineral Projects, and she has reviewed and approved the scientific and technical disclosure contained in this news release.

First Mining is a Canadian gold developer focused on the development and permitting of the Springpole Gold Project in northwestern Ontario. Springpole is one of the largest undeveloped gold projects in Canada. The results of a positive Pre-Feasibility Study for the Springpole Gold Project were announced by First Mining in January 2021, and permitting activities are on-going with submission of an Environmental Impact Statement (“EIS”) for the project targeted for 2022. The Company also holds a large equity position in Treasury Metals Inc. who are advancing the Goliath Gold Complex toward construction. First Mining’s portfolio of gold projects in eastern Canada also includes the Pickle Crow (being advanced in partnership with Auteco Minerals Ltd.), Hope Brook (being advanced in partnership with Big Ridge Gold Corp.), Cameron, Duparquet, Duquesne, and Pitt gold projects.

Forward-looking statements in this news release relate to future events or future performance and reflect current estimates, predictions, expectations or beliefs regarding future events and include, but are not limited to, statements with respect to: (i) First Mining undertaking a regional exploration program at its Springpole Gold Project in 2022 and the High Grade Island prospect being a priority target for the Company during such program; (ii) the potential for future exploration success at First Mining’s newly acquired mineral property interests in the Birch-Uchi Greenstone Belt to significantly increase the grade profile, resource potential and economics at the Springpole Gold Project; (iii) completion and timing of all earn-in stages under the earn-in agreement with Pelangio; (iv) completion and timing of all exploration expenditures required under the earn-in agreement with Pelangio; (v) timing for the formation of a joint venture between First Mining’s wholly-owned subsidiary, Gold Canyon, and Pelangio with respect to the Birch Lake Properties; (vi) the advancement and merits of the Goliath Gold Complex; and (vii) the submission of the EIS for the Springpole Gold Project. All forward-looking statements are based on First Mining's or its consultants' current beliefs as well as various assumptions made by them and information currently available to them. There can be no assurance that such statements will prove to be accurate, and actual results and future events could differ materially from those anticipated in such statements. Forward-looking statements reflect the beliefs, opinions and projections on the date the statements are made and are based upon a number of assumptions and estimates that, while considered reasonable by the respective parties, are inherently subject to significant business, economic, competitive, political and social uncertainties and contingencies. Such factors include, without limitation the Company’s business, operations and financial condition potentially being materially adversely affected by the outbreak of epidemics, pandemics or other health crises, such as COVID-19, and by reactions by government and private actors to such outbreaks; risks to employee health and safety as a result of the outbreak of epidemics, pandemics or other health crises, such as COVID-19, that may result in a slowdown or temporary suspension of operations at some or all of the Company's mineral properties as well as its head office; fluctuations in the spot and forward price of gold, silver, base metals or certain other commodities; fluctuations in the currency markets (such as the Canadian dollar versus the U.S. dollar); changes in national and local government, legislation, taxation, controls, regulations and political or economic developments; risks and hazards associated with the business of mineral exploration, development and mining (including environmental hazards, industrial accidents, unusual or unexpected formations, pressures, cave-ins and flooding); the presence of laws and regulations that may impose restrictions on mining; employee relations; relationships with and claims by local communities, indigenous populations and other stakeholders; availability and increasing costs associated with mining inputs and labour; the speculative nature of mineral exploration and development; title to properties; and the additional risks described in the Company’s Annual Information Form for the year ended December 31, 2020 filed with the Canadian securities regulatory authorities under the Company’s SEDAR profile at www.sedar.com, and in the Company’s Annual Report on Form 40-F filed with the SEC on EDGAR.